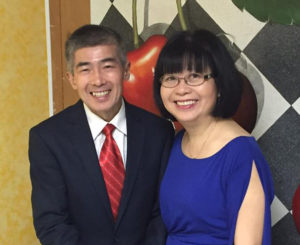 Rev. Douglas Louie was born in Hong Kong and grew up in Seattle, Washington.  In college, he studied engineering and mathematics.  After graduation he worked as an engineer for one year. It was during that time that he felt that there was little meaning in life.  After searching for answers in various religions and finding no satisfaction, he started attending a Christian church and came to the knowledge of Christ.

At age 22, Pastor Louie Committed his life to God and to serve Him in the ministry. Instead of immediately receiving the calling to the ministry, he was led to go into the field of Medicine.  After his medical training, Dr. Louie also completed doctoral studies in Public Health, Psychology, Christian Ministry, Law, and Theology.  He has been practicing medicine since 1985.

Soon after his conversion, Dr. Louie felt that God would call him into the ministry some day.  As result, he continued to take classes in the local churches and Bible school to equip himself for the ministry as a layman or as a minister.  In the year 2000, he completed his Doctor of Ministry degree from the Northwest Graduate School of Ministry.  Dr. Louie was ordained in 2002.

In late 2001, Dr. Louie perceived the need for a Chinese Christian church in Tacoma, and he felt the calling to enter into ministry.  With the support of his family and several individuals, the International Chinese Christian Church of Tacoma was formed in January of 2002.   Currently, Dr. Louie is the pastor of this church and continues with his full time medical practice.  Following the example of Apostle Paul, Pastor is bi-vocational and  does not take compensation for his service at church. Pastor Louie and his wife, Belinda, have a son and a daughter. Philip and wife Alice live in Chicago with their daughter Madelyn. Andrea lives and works in Seattle. The whole family commits to serving the Lord.

In 2007, the Elders (Mr. BK Tam, Mrs. May Tam, and Pastor Louie) appointed Belinda Louie to be the executive pastor of the church. Belinda accepted Christ at the age of 17. She has been a faithful servant since becoming a Christian. After completing her certificate of ministry, Belinda co-founded ICCCT with her husband in 2002.  Dr. Belinda Louie obtained her doctorate in Education from the University of Washington. Currently she is a full professor at the School of Education at UW Tacoma. Following the example of Apostle Paul, Belinda is bi-vocational and does not take compensation for her service at church.